A mother fights her ex to release their adult son with autism from an institution. 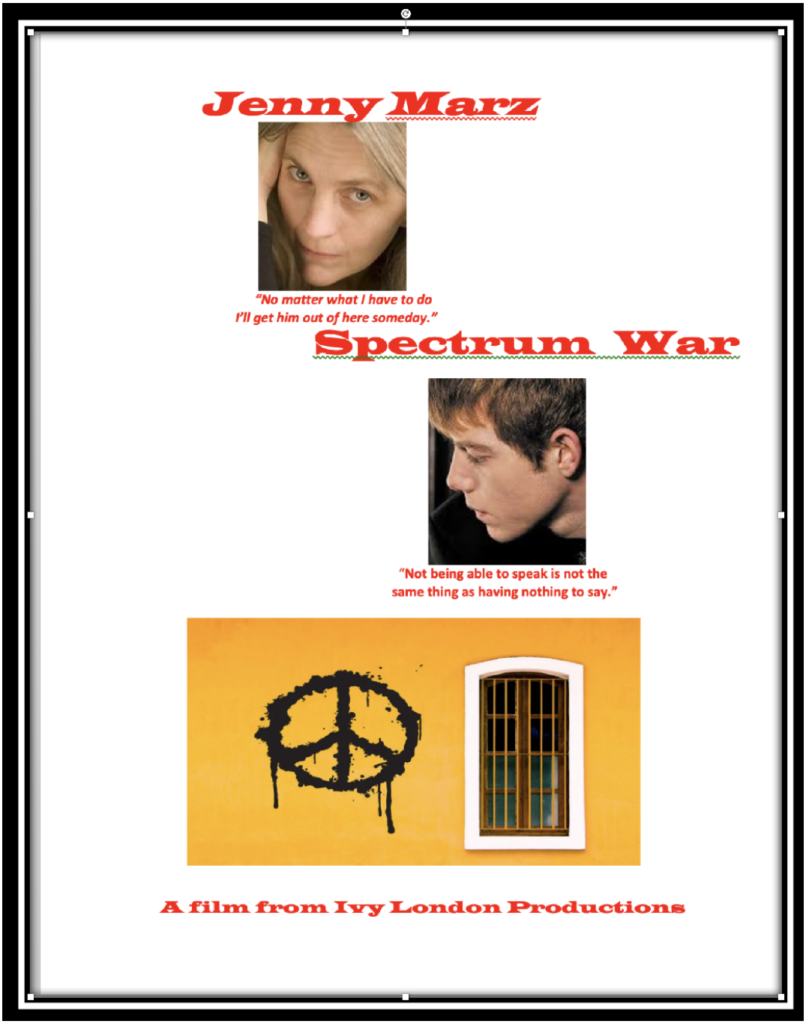 Hospitalized for depression, Jenny Marz loses custody of her four-year-old son with autism when her husband divorces her and places their son in an institution. Years later with leverage against her ex, she learns her son is abused and takes on a fierce fight to release her now adult son. The mother from hell rises to battle through the courts for guardianship from his father, a powerful, wealthy newspaper publisher with politicians and police in his pocket.

Autism impacts more than 75 million families worldwide, regardless of ethnicity, gender or income. It is an epidemic with 1:58 children in the U.S. today falling on the autism spectrum.

It is a war against a rampant disorder with no clear cause.

JENNY MARZ SPECTRUM WAR© was inspired by “Rain Man,” the hit movie starring Dustin Hoffman and Tom Cruise that won multiple Oscars. “Rain Man,” engendered our story as it sent the person with autism back to an institution, despite his $2M inheritance, reinforcing the idea that people with autism should be shut away. “Jenny Marz…” is a mother who lost her toddler son with autism due to a divorce and severe depression. She fights to release him as an adult from an institution, emphasizing social services available in the community.

With the increased numbers of children being diagnosed with autism worldwide, Jenny Marz Spectrum War will be seen by millions – families, doctors, caretakers, speech and physical therapist, schools, teachers – all whose lives are impacted by autism.

By the 1990s, advances in treatment made it possible for some children with autism to recover and others to improve significantly. Programs for people with autism proliferated, but those in institutions were unlikely to access them without an advocate to seek their release into the
community. Jenny Marz Spectrum War is a story with the tone and theme of movies like “The Blind Side” and “Wonder,” both hits worldwide. And like those movies, it is a story about a mother fighting for her child’s freedom from abuse and a chance for a better life.

Would you like to be a part of our next project!​

MY CHAPERONE – THE DRONE© is a family/action/adventure feature film targeting the youth, family, consumer drone and gaming audiences, with an original twist on the drone phenomenon. Its heroine, Megan Mills is a 17-year-old billionaire heiress, movie-star-wannabe rebel. She threatens suicide when her mother blocks her chance for a Hollywood audition. It backfires, and Megan is committed to a psychiatric facility. ​