What started as a punk rock collective has catapulted to a world movement for human rights. 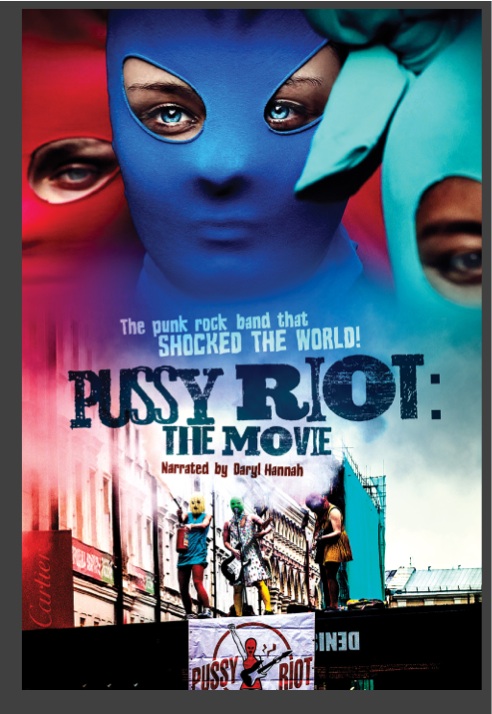 PUSSY RIOT THE MOVEMENT © is a documentary about the Russian women who challenged strongman, Vadimir Putin, and spent two years in prison as a result. Their crime: singing a punk rock song criticizing the dictator in Moscow’s main cathedral.

Narrated by Daryl Hannah, Pussy Riot the Movement could not be more timely. It is the only documentary to tell the full story of Nadia Tolokonnikvia, Masha Alyokhina and Katia Samutsevich. From the early lives that shaped them – to the trial that rallied the world to their cause – from Nadia’s and Masha’s two years in prison and hunger strikes – to their “early release” in December 2013 – the movie covers it all, including the post-prison beatings at the Sochi Olympics and their commitment to “riot on” with “MediaZona,” a non-profit dedicated to freedom of the press.

Constitution by ex-KGB officer Putin, a document that provides freedoms based on Western democratic principle. Russian dissidents who have been imprisoned on trumped up charges, artists who are reviled for their work and lawyers and writers who call the courts corrupt and medieval tell their stories of life in Russia today.

Interviews with Pussy Riot members, family of the women, dissidents and Russian lawyers reveal the

distain Putin has for the Russian Constitution and rule of law. The movie also covers the the story of Sergei Magnitsky, which provoked sanctions against Russians under the U.S. law, the Magnitsky Act. The act targets those who were involved in the death of the lawyer who uncovered $230 million in Russian tax fraud carried out by government officials. The lawyer involved in the recent meeting with the Trump campaign is tied to efforts to reverse the sanctions levied by the U.S. upon passage of the Magnitsky Act.